July 03, 2018
After four MRI scans, a nerve function test, and more blood work, I've once again been proven that I am not crazy and that the mysterious symptoms are not in my head. In my post, Mending the Heart of a Lupus Warrior, I mentioned that I was going to get a cardiac MRI.  I finally had that done and it was definitely a nerve-wracking experience. It wasn't the expected claustrophobia that got me.  I closed my eyes and meditated through most of the scan so I didn't feel like I was trapped in that narrow tube. What got me was the "stress test" portion of the exam, where they gave me some drug to make my heart race. My resting heart rate was at 87 bpm before they gave me the drug. The nurse practitioner (NP) told me that my heart rate should go up to 110 with the drug. It jumped up to 138.  The NP and the MRI tech both seemed surprised by that. Once the stress test portion of the scan was over, the NP decided to give me a drug to slow my heart rate back down because it wasn't really doing it on its own. It was not fun.

Given all this, I was convinced there must be something they were going to find. However, a week later, I saw my rheumatologist and she told me the scans showed no damage from the Lupus. She told me she thought it might have to do with my nervous system and so she referred me to a neurologist. Now, I don't know if I've written about this before, but one of my usual symptoms is a slight tremor of my right hand. I've had it for years, but when I got really sick from the Lupus, it got a bit worse and sometimes my hand would jerk and I would drop whatever I was holding. Three days before my neurology appointment, I was teaching one of my Flamenco classes. I was leading my 7th and 8th graders in their usual warm-up, which consists of arm and hand work, so that they could eventually have beautiful arms and hands that look something like this: 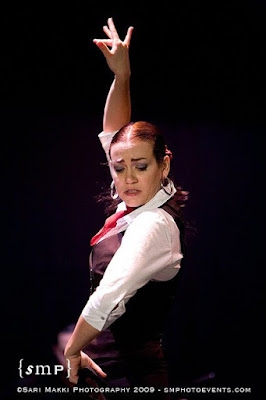 To get our hands to look like this, we practice rolling the wrists back and forth, while spreading our fingers, in and out.  After about 15 minutes of our arm and hand warm-up, I had the kids perform a choreography for me so that I could assess their progress. In class, I always clap the beat for them.  Once I was done with both the warm-up and the assessment, I went to get my phone so that I could play some music for them and noticed that both my hands were trembling more than I had ever seen before and very uncontrollably. Since I knew I had the neurology appointment, I immediately recorded them:

So when I got to the neurologist, I told him about the leg pain and fatigue on climbing inclines and stairs and I showed him these videos. He had a concerned look on his face and started asking me various questions, including if I had noticed any bladder issues. I told him I had been diagnosed with Pelvic Floor Dysfunction because I couldn't empty my bladder all the way. He proceeded to conduct a nerve function test on my legs by using a small metal prod to poke my legs with electrical currents. When he was done, he told me I had some mild neuropathy, or damage to my peripheral nerves. He then sent me to get some blood work done and gave me a referral for three more MRIs:  this time of the brain, the cervical spine, and the thoracic spine. When I called Cedars-Sinai Imaging to schedule the MRI appointment, the woman on the phone asked, "He's trying to rule out M.S., right?". Sure enough, I looked at my referral paper and saw the note, "R/O MS". Sigh.

I can happily tell you I do not have M.S. and my scans were fine. However, the blood work revealed the truth that something else was wrong with me. I saw my rheumatologist before I went back to the neurologist and she came in with the results and after telling me my scans were fine she said, "Mercedes, you were right. There is something wrong with you. This is why we listen to our patients." She then explained that I had tested positive for Anti-MAG Peripheral Neuropathy, a rare auto-immune disease that is even rarer in my case--apparently it mainly affects men in their 50s and 60s. Right away, I cried. The tears weren't just sadness, but once again the relief of having an answer. I then said, "By the way, two days ago was three years since the day we met. Happy anniversary." My rheumatologist told me I was going to make her cry too. We both laughed through our teary eyes. She told me she was going to talk to my neurologist before I saw him, so that they could agree on a plan of action. Before I left, she also mentioned that I tested positive for some protein in my blood, but that the neurologist should speak to me about it.

So when I saw the neurologist, he told me that he and my rheumatologist agreed to refer me to another neurologist who was a specialist in Anti-MAG. That appointment is on July 17th. He then explained to me that he was going to refer me to a hematologist so that they could look at the blood protein issue. When I was given the referral form for the hematologist, I saw that I would be calling the Cedar Sinai Cancer Center.

I proceeded to live the next two weeks with a quiet dread in the background of my mind. I went on with meditation, work, life, etc., wondering why I was being sent to a cancer center. I did some research on blood protein and neuropathy and started to find things about bone marrow cancers. Sure enough, when my husband and I went to the appointment, the hematologist told me that I tested positive for some "lambda" proteins in my blood. That this is found a lot in people where auto-immunity is an underlying problem. However, he said this also occurs in more serious bone marrow diseases, including cancer. He told me that the likelihood of actually having cancer at this point was very slim and that it was more likely that I have something called MGUS, or Monoclonal Gammopathy of Undetermined Significance. He explained that this is what they call a "pre-cancerous" state but that the statistics are really low that it actually ever turns into a cancer, which is why its significance is undetermined. If it turns out I have MGUS, the hematologist will have to regularly test me to make sure the condition doesn't develop into actual cancer.

In the meantime, in order to rule out something more serious to begin with, the hematologist ran more blood and urine work on me. I'm supposed to go back on Friday to find out.

So as usual, I will meditate, work, and do life for another week, while observing my quiet dread, sadness, and annoyance at what is now my every day. I will go from moments of grief to moments of gratitude for at least finding another piece to the puzzle. Lupus, Fibromyalgia, Anti-MAG Peripheral Neuropathy, and some other condition or disease of undetermined significance. I guess that's life. Every moment we live is of undetermined significance. We add the significance later when we know what happened next. I will keep you posted on what happens next.

Do you have Lupus, Fibromyalgia, Peripheral Neuropathy, or any other chronic illness or do you love someone that does? What is your every day like? Feel free to share in the comments below. 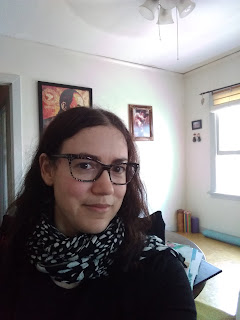 Down the Rabbit Hole and Back: Part 2

Wow. I thought I would write this second part a month after the last one. It's now been almost two years. Down the Rabbit Hole still seems fitting, so I have no shame in starting my Part 2 now. When I last wrote, I mentioned that I was going to get an EMG done by the Anti-MAG specialist. That visit was pure comedy. The neurologist was being assisted by a Fellow. She came to get me from the waiting room, led me to the room where they were going to test me, and pulled out a hospital gown from one of the wooden cabinets. She left the room to let me change. I took off my clothes and then proceeded to put on the green and white hospital gown. Or I proceeded to try to figure out how to put on the green and white hospital gown. I could not figure it out. It was shaped like bats wings. There were snap buttons all around the edges, but when I would try to snap the buttons to what I thought was their corresponding half, they wouldn't snap. I couldn't tell which way was up, which wa 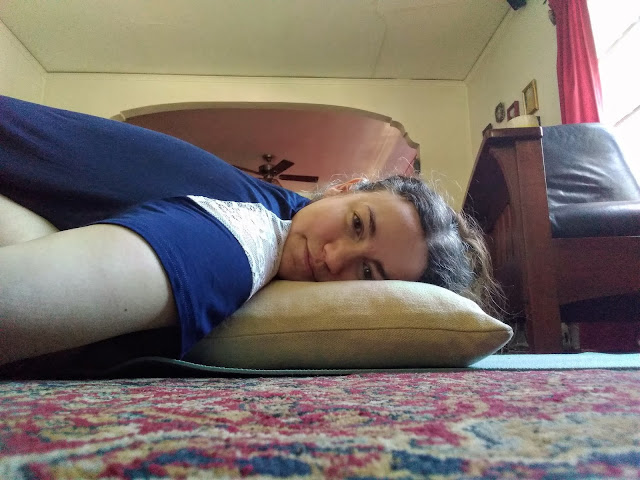 I let my Lupus anniversary slip by this year.  It's officially been five years since my diagnosis. It's also been five years since the Pelvic Floor Dysfunction diagnosis. It's been four years since the Fibromyalgia diganosis, and three years since the Anti-MAG Peripheral Neuropathy and MGUS diagnoses. As far as I'm aware, the Peripheral Neuropathy is the only illness that is technically progressive, meaning that it's supposed to get worse as time goes on.  The others can go into remission, get better, get worse, stay the same, it's all fairly unknown and, outside of treatment and care, a matter of luck. Well, I don't think I've had the best luck in the last few years.  Two years ago, I had that major back spasm that left me a bit debilitated and using a cane to get myself up from the bed and from my seats.  Physical therapy helped with the back, but I still have to use the cane for my worsening fatigue when climbing stairs and climbing hills and som 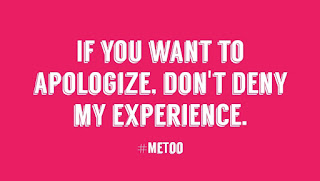 I Received My First "Me Too" Apology. It Was Disappointing.

Before I begin, I want to acknowledge that this may be triggering to anyone who has suffered harassment and/or abuse so please read at your own discretion. I don’t know why I’m writing this. I guess it’s because I’m a writer and I process things through writing. I guess I also feel compelled to share things that might help others, even when it’s uncomfortable to talk about. So, here goes. I got my first “Me Too” apology last week.  After receiving it, I have since learned that straight men have been coming out of the woodwork, apologizing to women they may have harassed or abused in the past as a result of the Me Too and Time's Up movements. Hence, out of nowhere, I received my first apology via Facebook Messenger.   As soon as I saw the name pop up, I thought to myself, “Is he about to apologize for that time?” And the thing is, “that time,” at the time was something I brushed off as an annoyance because I had been subjected to worse and would be subjected to worse later.   It